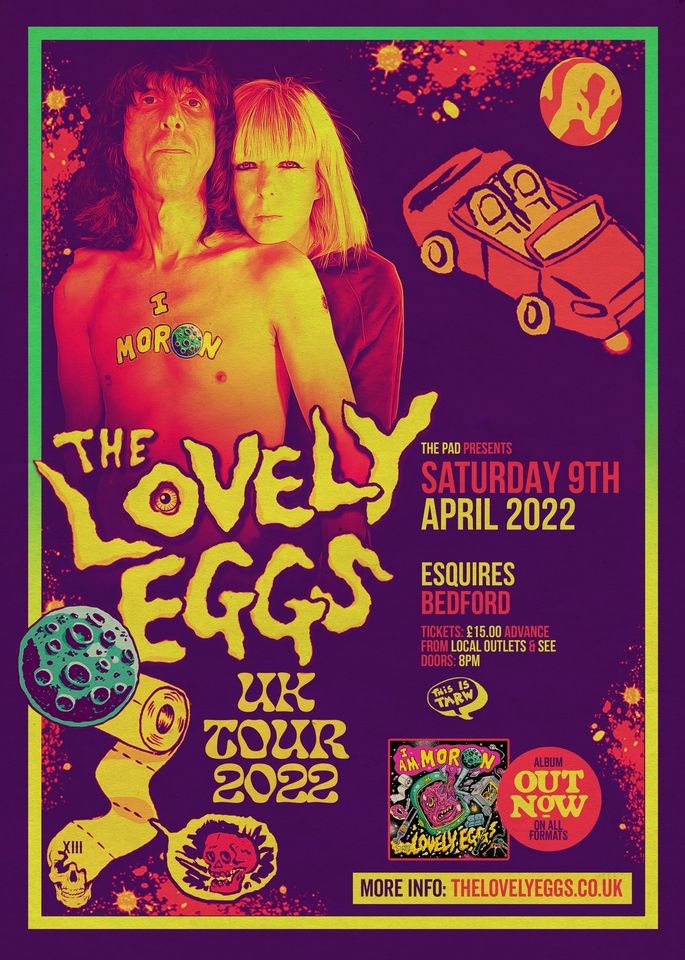 Missing in action at Bedford Esquires for nearly 4 years we are very pleased to announce the return of The Lovely Eggs to the venue on Saturday 9th April as part of their mammoth UK tour.

For the last two years The Lovely Eggs have sat back and watched England and the rest of the planet slowly eat itself. Their Number One Official UK Independent selling album “I am Moron” is the result of their observations, a relentless analysis of a modern culture that is bringing the world to its knees.

“I am Moron” was declared “Album of the Day” by BBC 6 Music and received critical acclaim from the national press. The Sunday Times called it “A Triumph”, ★★★★      “I am Moron is much cleverer than it would have you believe”– The Telegraph, ★★★★ – I Paper, 9/10- Louder Than War, “An act of fine calibration of noise and sweetness”- Q, “Packed with their observations of modern culture and the utter madness of the current world”- Sunday Mirror, Album of the month- Classic Rock, “Their Best Record Yet”– Long Live Vinyl, 8/10- Uncut, “Anarcho spirit dominates”– MOJO, “Excellent”- Brooklyn Vegan.

The Lovely Eggs are wilfully independent. They have no management, no booking agent, no record label and no publisher. With NINE BBC 6 music sessions under their belt, as well as sessions for Radio One and Radio X, they have enjoyed huge support from UK radio. And they continue to sell out gigs across the UK under their own steam.

They have produced six albums. Fifth album “This is Eggland”(their first with Dave Fridmann as producer/mixer) was released in February 2018 to critical acclaim. It was added to the 6 music Playlist and announced by HMV as one of their Top 50 Albums of the year.

With releases across the world, The Lovely Eggs have played hundreds of gigs around the UK, USA and Europe. Their songs have been produced by Gruff Rhys (Super Furry Animals), remixed by Tjinder Singh (Cornershop) and sampled by Zane Lowe for Scroobius Pip. Their latest release “I, Moron” is a collaboration with Godfather of Punk Iggy Pop which shot straight to number one in both the Official U.K. Physical and Vinyl charts.

With observational and often surreal lyrics about life The Lovely Eggs have a powerful raw sound that creates the sonic illusion of a band twice their size and have become known for their ferocious yet joyous live performances. They’re undoubtedly the most real band in Britain, operating in a world when true authenticity is hard to find.

The Lovely Eggs are one of the most exciting, innovative and genuine bands of the Great British Underground. Welcome to their world.

Tickets priced £15 are on sale Friday 11th February and available in person from Slide Record Store / Esquires bar from the 14th Feb.